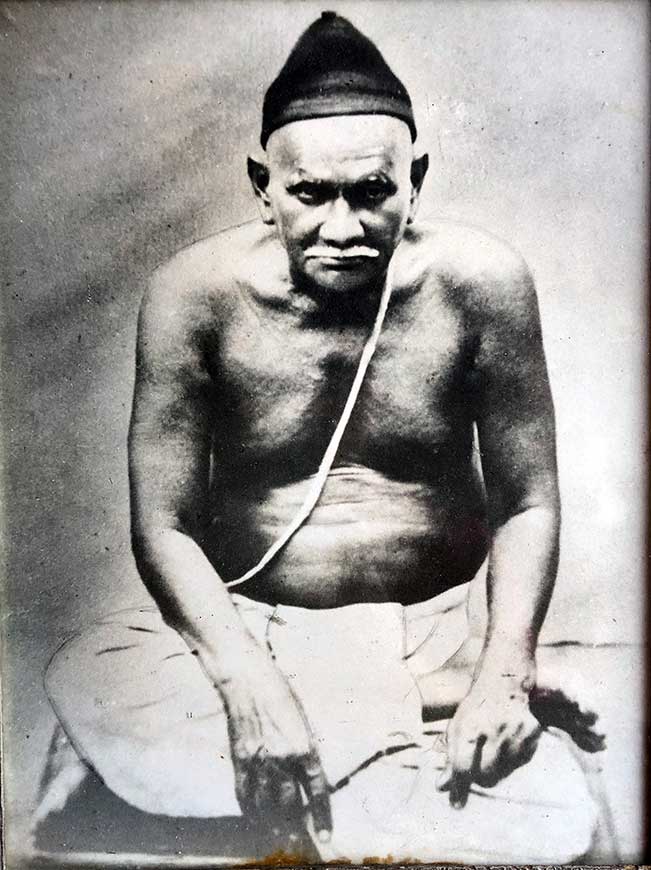 Sadguru Shri. Amburao Maharaj, also known as Rv.”Baba” in the real sense of term, was the protector and guide to all his disciples on the path of spiritual life. He had a spiritual bent of mind even in his early youth. He was blessed with nama mantra by Sadguru Shri. Bhausaheb Maharaj and with devotion and rigorous practice of nem (meditation) he became siddha (awakened), his spiritual teacher asked him to spread bhakti and spiritual teachings, which he did with devotion. After Bhausaheb Maharaj egressed, Amburao Maharaj was the only savior to all the devotees. He traveled far and wide to spread Bhakti and blessed many sadhakas by initiating them with Nama mantra. Sadguru Shri. Gurudev Ranade also followed his footsteps and sought guidance from him whenever needed. Amburao Maharaj and Gurudev Ranade were disciples of Sadguru Shri. Bhausaheb Maharaj, and were very close to each other as Guru-bandhu.

Sadguru Shri Amburao Maharaj passed away in the year 1933, after fulfilling the mission entrusted to him by his spiritual master ( Rv. Sadguru Shri Bhausaheb Maharaj). He may be described as the modern ‘Kalyana’ of revered Bhausaheb Maharaj Umdikar, like the Kalyana of Ramadasa, a prominent saint of Maharashtra of the 16th century.

Sri Amburao Maharaj/Baba (1857 – 1933) was a premier desiple of the saint of Umadi. Baba was born at Jigjeevani in a poor Smarth Brahmin family. He lost his parents in his early age and went to Devar Nimbargi to receive his education. On completion of his primary education, he returned home to face the odds of life. A severe draught overtook the whole of Bijapur district. Young Baba went to the muth of Shankarcharya at Sankeswar. When the draught condition receded Baba returned home. He joined the service in famine relief work on daily wages but that was soon terminated. He went to Inchageri to manage the house-hold affairs of his widowed sister. There he got married but very soon lost both his wife and daughter.

Sri Baba went to Ghangapur and on the 3rd day, a Sanyasi appeared in his dream and handed over to him a rosary of beads and disappeared. Later he came in contact with the saint of Umadi who listened to Amburao’s sufferings sympathetically and compelled him to take Nam through the mediation of Sri Savalasang – the spiritual brother of saint of Umadi. In the beginning Baba was reluctant to take Nam as he was afraid of following two vows – not to touch parastri and paradhan but the saint of Umadi took up the responsibilities and then Sri Baba was initiated. Sri Baba is said to have made an advancement in spiritual life and regarded the saint of Umadi as God. There is an incidence related to this. One day the saint of Umadi in the course of his discourse on Das Bodha told that Sri Nimbargi Maharaj brought divine Nam from Swarga (Heaven) and hence got authority to impart it to others. Innocent open – hearted as Baba was, he frankly asked “Maharaj, you just told me how Sri Nimbargi Maharaj got the authority to initiate others. Please let me know whence have you brought the Nama and who gave you the authority to impart it to others”. As it was then time for meditation, Maharaj 172. without giving any reply went to his room and Baba also went to the terrace of Bhimaraya temple for meditation. In the course of meditation Baba had a vision of Nimbargi Maharaj and heard his following words : “Oh, you Baba, why have you let loose your tongue? You have no business to question the authority of Bhauraya (the saint of Umadi). I have given him the authority to initiate. Shut up! Simply mind your meditation”.

Baba is said to have reached the height in spiritual life and started initiating the disciples after sometime i.e., after the death of the saint of Umadi and with the permission of his spiritual teacher in the dream vision. Baba like his other spiritual brother Prof. R. D. Ranade had a greater number of educated disciples than even the saint of Umadi had. But Baba had to quit his muth on account of some strong differences of opinion with some followers of this Sampradaya regarding the authority of initiation, successor to muth. performance of miracles and due to a few more reasons. Baba established his own independent muth Southward in the campus of the muth in 1927 by keeping the photo of the saint of Umadi and started his work. Baba left his mortal coil on 22/12/1933 at Bijapur. His Dahan Bhoomi is by the side of his spiritual teacher’s Dahan Bhoomi at Inchageri. A Samadhi of Baba was built and the temple over it constructed in 1931. Sri Baba Saheb Sangoram – his disciple from Athani built a Shikhar over it in (March April) 1958.

Again due to differences of opinion among the different followers of Inchageri Sampradaya it was neglected for some time. The renovation of this math (Baba’s) has been undertaken recently by Sri Guruputtrappa Maharaj the present head of Inchageri Kshetra. Baba has been compared to Sri Kalyana of Ramdas. Baba’s saptah was celebrated for one month in Poushua Mas at Inchageri.

After the demise of Sri Amburao Maharaj (1857 – 1933) Sri Gurudev Ranade started initiating the people. He initiated about 4000 people including a few Christian (foreign and
UZ Indian), Muslim, Jain aspirants. Of course, most of them came from Urban educated background of Maharashtra and Karnataka.