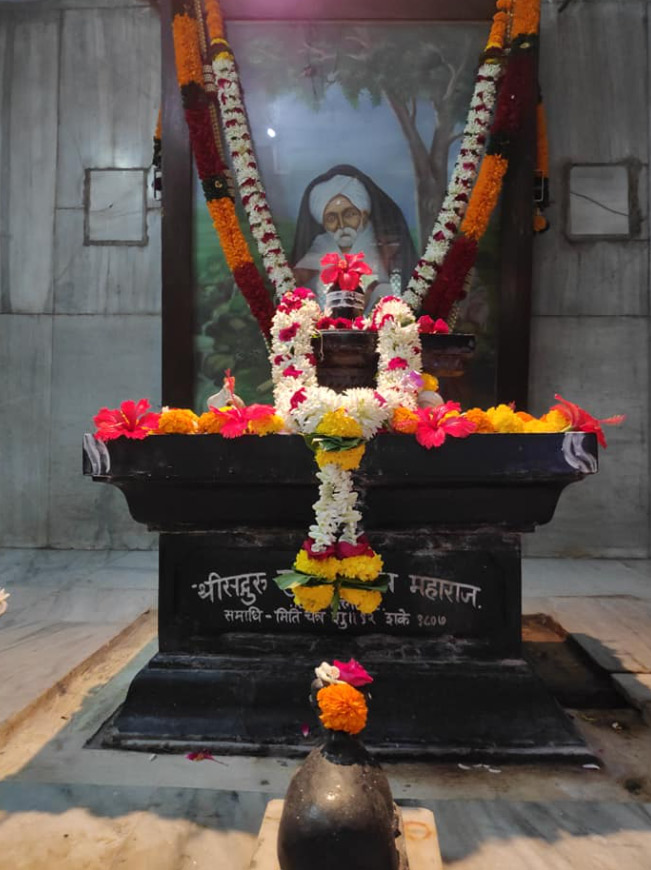 Shri Narayanrao Bhausaheb (Gurulingajangam), popularly known as Nimbargi Maharaj, the founder saint of this sect of Spiritual tradition called as “The Nimbargi Sampradaya”.

At the age of 25, Shri Narayanrao Bhausaheb, a member of a Virasaiva family in the village of Nimbargi, a small settlement in Indi Taluka of Karnataka State of India, was severely scolded by his father for taking active part in Holi festivities.
Fueled with rage and shame, he left for Pandharpur, a well-known pilgrimage town on the banks of Chandrabhaga River in Solāpur district, Maharashtra, India, which is still famous for God Vitthal Rakhumai Temple and a center worship place in Maharashtra states’ saint tradition. He left his house without informing anyone and eagerly prayed to Lord Vitthal for three days with deep devotion to forgive his folly and to show him a way towards a right path in his life. On the third day, Lord Vitthal appeared in his dream and blessed him with a message “Child, do not worry. Go to Siddhagiri, you will find your spiritual master who would guide you further on the right path”. This assured Narayanrao to return to his home.

After a few days, he visited Siddhagiri, a hilly place, approximately at a distance of 13 Kilometers from the present city of Kolhapur, in the state of Maharashtra. Siddhagiri was a place of pilgrimage for Naryanarao’s family. After offering his prayers in a temple to Shri Kadasiddheshwara (KadaSiddha), the main deity at Siddhagiri, Shri Narayanrao was passing by a cave nearby. He saw a Yogi (Muppin Muni) emerging out of the cave and who invited Shri Narayanrao to approach him. Looking at the enlightened figure of the Yogi with an aura, Narayanrao rushed towards the yogi and bowed at his feet with eagerness for his aim towards seeking guidance. The Yogi took Shri Narayanarao into the cave and blessed him with the divine Nama and also advised him to meditate daily on the Naam. The Yogi said “If you do the meditation sincerely, your fame would spread in all directions.”

The saint of Nimbargi thus had his initiation from a saint called Muppinmuni, who lived about the year 1810 in Siddhagiri, and who was in the Kadasiddha line. Later Muppinmuni shifted to Sirasangi on account of the conflict between Kolhapur and Kagal. Manuscripts and documents relating to his are found even at Sirasangi. Muppinmuni is a historical figure because the saint of Nimbargi in one of his songs has directly referred to him: Muppina muniya pididu vachana kappugorala kadasiddhaniddedege hogi Sastanganago ni, obey the
word of Muppinmuni, go to the place where the blue – throated Kadasiddha stays and prostrate yourself before him. Hence it is quite definite that the spiritual teacher of the saint of Nimbargi, namely Muppinmuni, lived in Siddhagiri.

Soon after getting blessed by the Yogi, Shri Narayanarao returned to his house, but was soon engrossed in the worldly matters so much so that he could not follow his spiritual teacher’s guidance and did not meditate for 6 years. The Yogi, who was a spiritual master, realizing that his student was unable to progress on the spiritual path, visited Shri Narayanarao Bhausaheb’s house at Nimbargi. Narayanrao, was astonished to see his teacher and with great devotion welcomed his teacher to his home and worshipped him. As a token of gratitude towards his teacher, gave 2 Rupees to his teacher. The teacher, graciously returned the 2 Rupees and advised to use 1 out of it for worldly matters (Prapancha) and the remaining 1 for God Devotion or Spirituality (Parmartha).

Intense Meditation
Narayanrao, with his curiosity, asked his teacher “Can the worldly life be made happy by meditation?” The teacher replied “Nothing’s impossible to the Grace of God.” Hearing this reply from his spiritual teacher (Guru), Narayanrao was rejoiced and promised to meditate with full vigor, and walk on the path as shown by the Guru. Narayanrao fell at his Gurus feet in the deepest gratitude and before he could stand up, the Guru suddenly left.

This incident became a turning point in the life of Narayanrao, who had crossed age 31, at that point in time. With the resolution of following the spiritual path shown by his Guru, Narayanrao began one-pointed devotion towards God.
He changed his profession of dyeing cloths and chose to become shepherd instead. With other Shepherds he used to take his flock to graze in the hills and would go into deep meditation practice, in a shelter of a tree which he chose for this purpose. To follow this routine, he would request his friends to take care of his flock.

Day by Day, his meditation (Nem) and devotion increased. His guide in this process was his own Atman or self. For the next 36 years he progressed onto this path and took the highest forms of spiritual experiences and experienced divine bliss. The pinnacle of these experiences, that is to visualize, interact and ultimately merge into the infinity of Atman, becomes the Spiritual stage where the student himself can become a spiritual teacher or a Guru.

Attaining Sadguru stage
For next 28 years of his life, he continued his meditation as well as taught his disciples the same path to self-realization or becoming one with God.
Due to becoming the spiritual master, or a Sadguru for his disciples, he came to be known as the saint of Nimbargi or as Nimbargi Maharaj.
He conducted discourses to explain the hidden meaning of Dasabodha the holy book written by Saint Ramadas.  His teachings on this book are published by the name “Bodh-Sudha” or “The Nectar of Illumination (English translation of Bodh-Sudha)”
One of the closest disciples of Nimbargi Maharaj was Raghunathpriya Sadhu Maharaj. When Raghunathpriya Maharaj visited a village ‘Umdi’ (Karnataka state, India), he advised Shri Vyankatesh Khanderao Deshpande (Bhausaheb Maharaj ) to get initiated by Shri Nimbargi Maharaj.

Nimbargi Maharaj, left his mortal coil at the age of 95 and became one with Atman (God) on 29th March 1885.

Posthumously
His Samadhi (Sacred tomb) is erected and present today at Nimbargi Village. Many meditation sessions happen at this place throughout the year and the generations of disciple visit this holy place every year to worship.

Shri Gurudev Ranade describes Shri Nimbargi Maharaj as  “He was like a Bakula tree, whose flowers, though in a corner, would send their fragrance, throughout the length and breadth of Karnataka.”

Swami Vivekanand Once said: “The Greatest men in the world have passed away unknown. The Buddha’s and the Christ’s that we know are but Second – Rate Heroes in comparison with the greatest men of whom the world knows nothing. Silently they live, silently they pass away; in time, their thoughts find expressions in Buddha’s and Christ’s, and it is these latter that become known to us.” – from the lectures ‘On Freedom’.  (From the book of Nityanemavali)
Shri Nimbargi Maharaj was one of such greatest men. He lived for GOD; served Him with deep devotion, preached masses for doing Nem(Meditation),