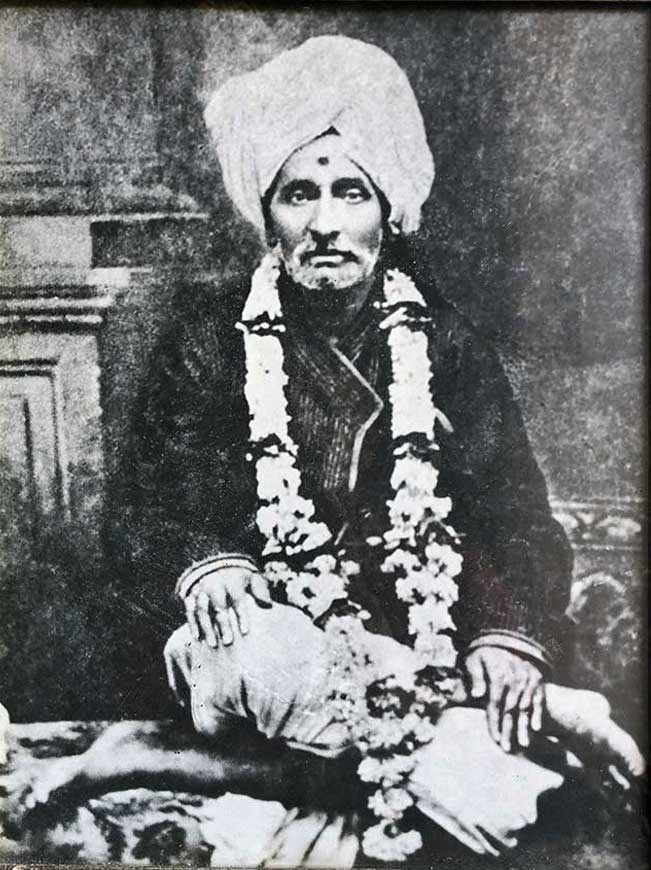 At ‘Umadi’ a village in the Jat Taluka of Maharashtra, which is around 9 KMs from the village of Nimbargi, the village where Sadguru Shri Nimbargi Maharaj stayed, lived ‘Deshpande’ family. This family was renowned and a well-respected one. The patriarch Shri Khanderao Deshpande and his wife Bhaghirathibai had three sons, First son Yashwantrao (Nanasaheb), Second son Martandrao and the third son, Venkatesh (Bhaurai). The Deshpandes were known as a very religious and just family.

Venkatesh alias Bhaurai was born on the day of Ramnavmi Festival in the year 1843. He was a well-known child for being highly intelligent. Loved by his teachers for good behavior and equally good at studies, he also had a devotional bent of mind from the beginning itself.

The Balbheem temple in Umadi, is where Venkatesh used to worship with deep devotion. Balbheem is another name for Lord Hanuman. Lord Hanuman is termed as the greatest devotee and disciple to Lord Shri Ram in the Ramayana. This temple was especially known as very holy and a wish fulfilling temple.

Young Venkatesh used to visit this temple for daily prayers and temple rituals. On the parallel time, one of the great disciple of Shri. Nimbargi Maharaj, Shri. Raghunathpriya Sadhu Maharaj (also known as Sadhubua), was staying at this very temple for doing meditation. Sadhubua, observed this boy (Venkatesh) doing daily prayers with deep devotion and was astonished. It was through the introduction by Sadhubua that the greatness of Shri Nimbargi Maharaj was sowed in Venkatesh.

Meditation, Practice and walking on the path shown by Sadguru

Venkatesh continued his deep meditation at Umadi for the next 28 years. Every early morning, he used to visit the nearby place outside Umadi to meditate, by noon he would return for lunch and work. The penance meditation reign that he followed produced the spiritual bliss of the highest command. The spiritual experiences that he gained were so blissful and blessed that, Nimbargi Maharaj gave the torch to spread the spiritual path in the hands of Venkatesh.

Before leaving his mortal coil, Nimbargi Maharaj, gave the message to Shri Venkatesh (Bhausaheb Maharaj) to carry on the spiritual activity and spread the teachings in all directions. Post Shri Nimbargi Maharajs’ departure from the world, Bhausaheb Maharaj increased the intensity of meditation. This blessed Bhausaheb with “Advaita Siddhi”. The highest form of realization with the self.

He further continued the strict meditation schedule for 18 years. Shri Bhausaheb Maharaj meditated for 12-13 hours per day. This time also included reading of holy scriptures like Dasbodh, Manache Sholk and reciting Bhajans. He always gave importance to the time and followed the strict schedule of meditation. Bhausaheb Maharaj hosted the Shravan Sadhan saptaha at his place at Umadi from 1885 to 1903, i.e. for 18 years. For this Saptaha or spiritual gathering many devotees would attend. In this Saptaha, the meditation session would start at 6.00 am in the morning till 3.00 Pm in the afternoon. Great disciples used to sit with Shri Bhausaheb Maharaj for meditation without moving, these disciples included Shri, Bhaurao Savalsang, Sadguru Shri Amburao Maharaj. and Sadhvi Shivalingavva Akka .

For the next 18 years, Shri Bhausaheb Maharaj, did the meditation at night from 12.00am to 2.00 am by standing in his house. He had specially built a space of 2 feet in the wall, in his house, where only a person can stand. The intense meditation blessed him to become one with aatman and to be the saint of highest statue. He became a Sadguru and had many disciples and followers. He prayed to Lord Vitthal to fulfill his wish to build the Samadhi temple of his Sadguru Shri Nimbargi Mahraj. Accordingly, he did visit the Pandharpur, Vitthal Rakhumai Temple.

Hence after the passing of Shri Nimbargi Maharaj, Shri Bhausaheb Maharaj carried forward the teaching in this spiritual lineage and initiated many disciples for 28-29 years.

Shifting the center for spiritual tradition to Inchgiri

Under the guidance of Bhausaheb Maharaj, another Samadhi temple of Shri Nimbargi Maharaj was built at the village of Inchgiri. Sadguru Shri Nimbargi maharaj through a dream conveyed a message to Bhausaheb to spread devotion and the path of meditation across the world. From this spiritual center he spread devotion in Karnataka and Maharashtra, visiting various places like Bijapur, Jamkhandi, Solapur on horse-back.